When you book with an account, you will be able to track your payment status, track the confirmation and you can also rate the tour after you finished the tour.
Sign Up

Or Continue As Guest

When you book with an account, you will be able to track your payment status, track the confirmation and you can also rate the tour after you finished the tour.
Sign Up
1012
Full Day
Availability : Private Tour
From Marrakech & Back
To Ouarzazate

This Day tour from Marrakech to Ouarzazate & Kasbah Ait Ben Haddou is ideal for those of you who cannot spare more than one day to get a sneak of Morocco Sahara desert. Take this round trip of 400 km across the Atlas mountain range via the Tizi Ntichka pass at an altitude of 2269 meters above sea level. Marvel at the brilliant landscape views dotted with Berber villages. Visit the legendary fortified Berber village of Kasbah Ait Ben Hadou and its sister town of Ouarzazate famous as the Hollywood of Africa.

Your private Day tour Marrakech to Kasbah Ait Ben Hadou and Ouarzazate will start early in the morning ( 07h00 AM ) with a pick up from your hotel /riad.
Drive east of Marrakech crossing the windy high Atlas Mountains and Tizi Ntichka pass. Numerous stops will be made along the way to enjoy the views, take photos, stretch your legs or drink a cup of coffee.
Visit Ait Benhaddou village (where Star Wars were filmed). UNESCO as one of the world’s cultural treasures has classified the fortified village of Ait Benhaddou. It is studded with crenellated towers and its buildings decorated with geometrical motifs and is considered to be one of the most beautiful villages of this kind in Morocco. A program of restoration work is currently underway to encourage the population of the village, which is at present inhabited by just five families.
From here, continue to Ouarzazate, which marks the beginning of the Sahara desert. Visit Taourirt Kasbah. This former Glaoui residence, situated on the edge of the town, on the road to Morocco Sahara desert, is considered to be one of the most beautiful kasbahs of Morocco. It consists of a maze of luxury apartments, simple clay houses and crenellated towers, which are lavishly decorated with geometric motifs. Part of the fortified village is open to the public.
After some time at leisure for a cup of mint tea or coffee, drive back to Marrakech later in the afternoon while crossing the High Atlas Mountains.
Your Full day trip from Marrakech to Ouarzazate and Kasbah Ait Ben Haddou will end late in the afternoon by a drop off at your hotel or in the city centre.

Marrakech to Ouarzazate Price Per Person

What you can expect during your visit 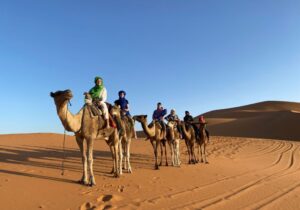 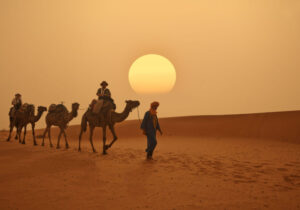 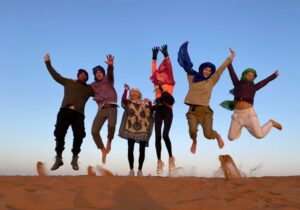 From119 EUR
3 Days
From Marrakech & Back
To Merzouga
0 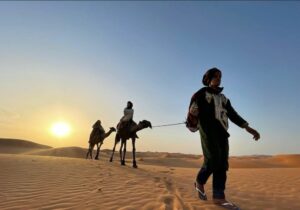 From189 EUR
4 Days
From Marrakech & Back
To Merzouga Desert
0 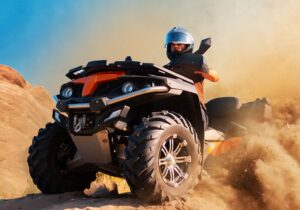